HISTORIC RACE IN BENTON COUNTY, which is implementing RANKED CHOICE VOTING for the first time in Oregon, paving the way for a modern Democracy.

Mike Beilstein is the Pacific Green Party candidate for Benton County Board of Commissioners, Position 2.  After winning the Green nomination, Beilstein was subsequently co-nominated as the candidate of the Progressive Party of Oregon.  He will face incumbent Democrat Xan Augerot and the Republican nominee Tom Cordier in the County’s first “ranked choice” election.

Beilstein says he has two goals for the election.  “First, I want to give County voters a good experience of the ranked choice system.  Secondly, I want to ensure climate change is the major issue in the campaign.  Regional, national and global solutions are needed to address the accumulation of greenhouse gasses in the atmosphere.  However, local governments can act quickly and demonstrate to higher level representatives that they are ready for bold action and bold leadership.”  Beilstein’s campaign will offer a “Green New Deal for Benton County,” in coordination with Green Presidential Candidate Howie Hawkins’ campaign for a “Green New Deal for America.” 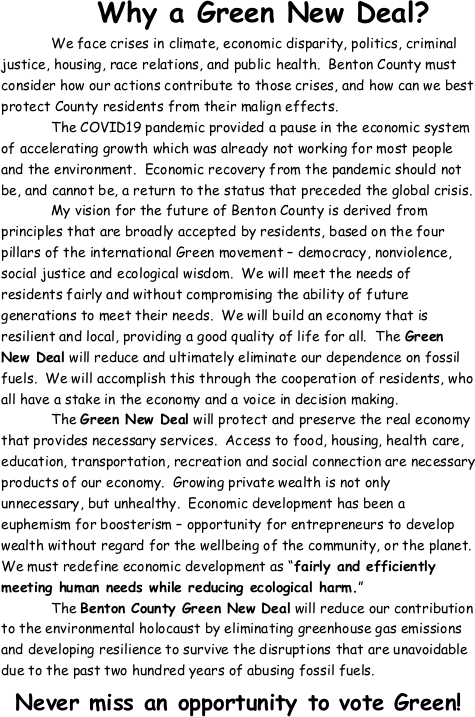 ainstream identity for the campaign and helped get funding through the legislature to assist the County with implementation.  Green volunteers collected the 1000 signatures necessary to put the charter amendment before voters.  There was no organized opposition and it easily passed.  Demonstration of a successful ranked choice election in Benton County could inspire other counties, and eventually the Legislature, to implement this system for most elections in the state.  Ranked choice voting, also called ranked preference and instant run-off voting has been recently adopted in many US locations.  In Maine, all state elections are now by ranked choice.   Even the Maine US Presidential election will be by ranked choice this year.

Beilstein is a retired chemist who worked for Oregon State University for 30 years.  He served for 12 years on the Corvallis City Council and was a Green candidate for County Commissioner in 2000.  In that election, he received 17% of the vote.  Democrat Jay Dixon won with a majority.  Beilstein says things are different now.  “That year, 2000, when Ralph Nader ran for President, was a high point for the Green Party.  We are certainly weaker today, but still just as relevant.  Party affiliation is less important than it was twenty years ago.  Voters may be more willing to vote for someone who is not a D or R.  We have ranked choice voting now, so no fear of a spoiler effect.  More people know me now, which could help or hurt.”

On the Corvallis City Council, Beilstein was an advocate for library services and bike/pedestrian/transit improvements.  He served on City Police oversight and advisory committees.  He was an antagonist to economic development, which we said was “boosterism to benefit entrepreneurs at the expense of quality of life for residents.”  In his last years on the Council (2015-16) he chaired the Housing Development Task Force, which mapped out plans for producing more work force and lower income housing.

Outside of City government, Beilstein was Secretary of the Corvallis NAACP for 15 years.  He served on the boards of the Pastoral Counseling Center and the Corvallis Environmental Center.  He was once President of the Corvallis Historic Auto Club.  He currently volunteers with the Corvallis Sustainability Coalition action teams for Housing, Community Inclusion and Economic Development.

Reduce litter – tax take-out food and all container materials. Vendors are responsible for the final disposition of all packaging.

Invest in the stored carbon of plants and soil. Promote regenerative agricultural that builds soil carbon, rather than depleting it.

Lengthen the harvest cycle for forests to greater than 85 years to stop the “mining” of carbon through industrial forestry. 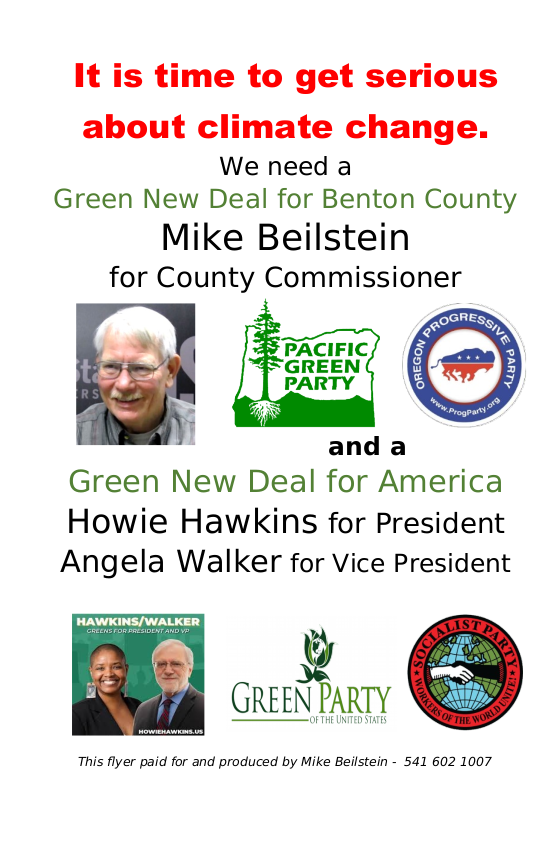 End use of chemical herbicides and insecticides.

Promote the local currency, the Corvallis HOUR, by paying bonuses to County employees in HOURs, and accepting HOURs for payment of property taxes.

Provide appropriate counselling and support for the unhoused to achieve independence and healthy fulfilling lives.

Lobby the Legislature to clarify the constitutionality of public banks in Oregon. Finance public improvements without the parasitic involvement of Wall Street banks.

Universal health care access through increased funding for the Benton County Health Department. Fully utilize all available federal, state and private insurance resources. Increase the Health Department budget to adequately meet the needs of those currently falling through the cracks.

Find alternatives to cash bail for suspects awaiting trial. Make supervised no-bail release the standard. Suspects who are likely to abscond or re-offend should not be released with or without bail.

Negotiate a land swap to bring the 509J School District area of Linn County into Benton County and transfer the portion of North Albany within the City of Albany to Linn County.

Provide broad band internet access to all of Benton County.