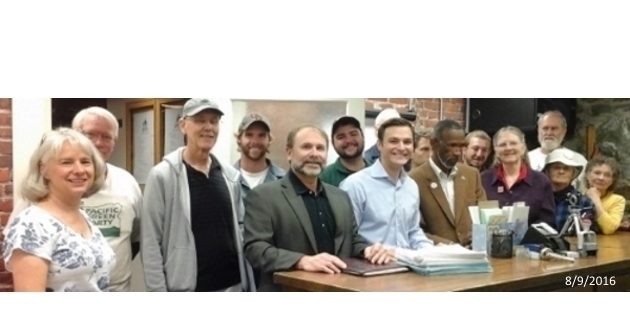 Photo of the campaign team turning in 4,500 signatures on 9 August! Press Release: The Benton County Elections Department has notified the Benton County Ranked Choice Voting campaign that its charter amendment initiative will be on the November ballot.

In a letter dated August 12, Benton County Clerk James Morales confirmed that the Better Ballots campaign submitted far more than the required number of valid signatures to put its measure before county voters on Election Day.  Now identified as Benton County Measure 2-100, the initiative calls for electing county officials in the general election by Ranked Choice Voting.  Party primaries will not be affected by the measure.  Full text of the release is available here.

The campaign, which needed 2,895 petition signatures from registered Benton County voters to get the initiative on the ballot, submitted over 4,500 signatures to the Elections Department; more than half of those were collected by volunteers.  County elections officials determined that the petitions contained 3,776 valid signatures, or 130% of the total needed to qualify for the November ballot.  “The very same dedication and support that made this signature drive so successful will help us bring Ranked Choice Voting to Benton County,” said State Rep. Dan Rayfield, one of two Chief Petitioners for the successful signature drive.  Addressing the merits of Ranked Choice Voting, Rayfield added that “this initiative will ensure that whoever wins office in Benton County has the broadest support possible,” and that Ranked Choice Voting “more accurately reflects the will of the people.”

Ranked choice voting is a voting method used in over a dozen U.S. cities, including San Francisco, Minneapolis and Portland, Maine.  With ranked choice voting, voters rank candidates in order of preference, marking their first, second and third choices, instead of voting for just one candidate.  A candidate who wins more than 50% of first-choice rankings is elected. If no candidate gets more than 50% of first-choice votes, the candidate with the fewest first-choice votes is eliminated and that candidate's supporters then have their votes count for their second choice.