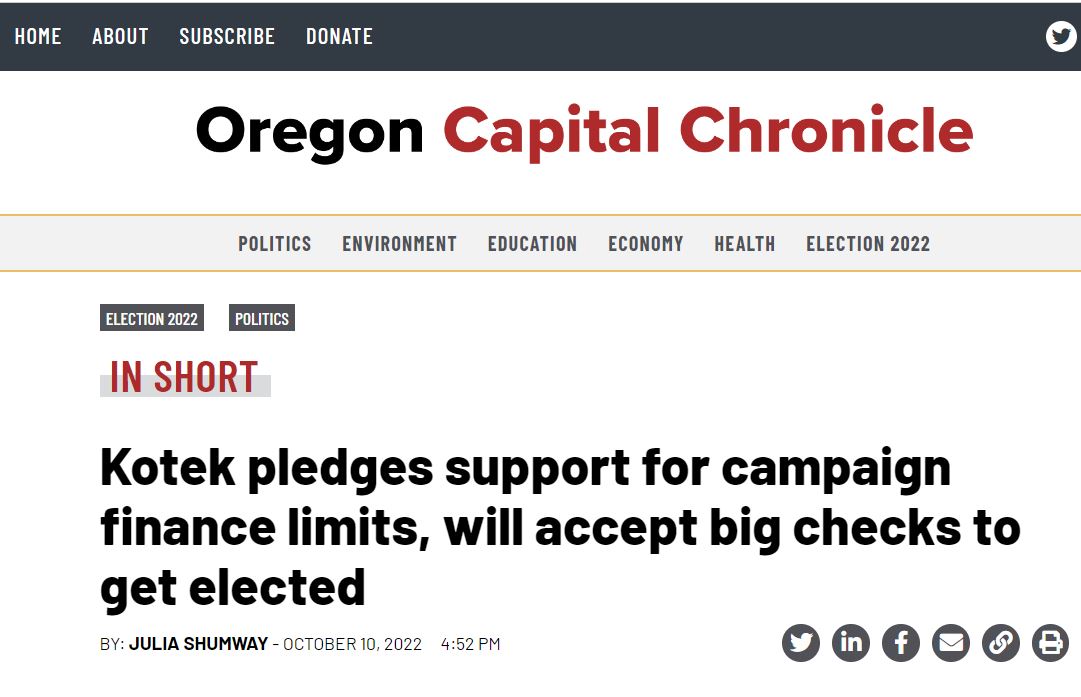 “I played sports in high school. If you didn’t like the rules, you didn’t change the rules, you just played by them,” she said. “Right now those are the rules of the road for this campaign, but if I have any say this will be the last governor’s race where we have no limits.”

Oregon is one of only five states with no limits on how much money any person or organization can give to a campaign, and efforts to reform the system have repeatedly failed. Kotek supported legislation in 2019 that would have created caps of $2,800 for statewide races and $1,000-$1,500 for legislative races.

Drazan voted against it, as did all but one other Republican in the state House. At the time, Drazan said Oregon’s previous three-year experiment with strict campaign finance limits in the 1990s resulted in a political environment in which independent groups still spent money attacking or supporting candidates.

Independent expenditures aren’t often used in Oregon, because it’s more cost-effective to give money directly to candidates. In other states and in federal races, outside groups more frequently spend money to elect certain candidates, though these independent groups are barred from coordinating with campaigns.

Paravicini said that she withdrew for “personal reasons” and described a question about whether there was any truth to the Republican allegations as “gaslighting.”

“What is Drazan’s position on undue influence, on money?” she said. “That is a big issue, not because I withdrew from the race for personal reasons.”

Our stories may be republished online or in print under Creative Commons license CC BY-NC-ND 4.0. We ask that you edit only for style or to shorten, provide proper attribution and link to our web site.