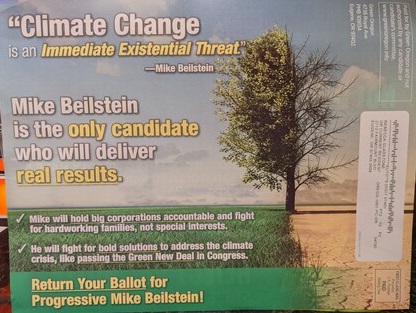 by Brandon Kamerman and KVAL.com Staff

Mike Beilstein: Pleased to meet with you.

Troubling news month after month with the national inflation report. Sitting around and over 8% for several months. That can take a toll on a lot of people in the 4th Congressional District. What do you think should be done at the federal level to address this issue?

MB: I’m glad you asked that. I think people fail to recognize the inflationary effects of military spending. You know, we have record military budgets, over $800 billion in the current budget, and if you take other securities spending, it’s probably over a trillion dollars in defense spending, and defense spending is inherently inflationary. You know, inflation occurs because there’s money circulating in the economy that’s not matched by goods and services, and goods and services in the military, if anything it destroys utility rather than building it so it’s amazing that during the Vietnam War that was a clearly understood fact that military spending was causing inflation and yet now nobody talks about military spending as the cause of inflation and I think it’s one of the main ones.

Mike Beilstein, running on the Pacific Green Party of Oregon and Oregon Progressive Party tickets, is a retired chemist and was a nutrition researcher at Oregon State University for 30 years. He formerly served on the Corvallis City Council.

This is his sixth bid for the 4th District seat, though his first time in a contest for the seat that doesn't include DeFazio.

Beilstein said he primarily is an anti-militarist, having begun his political career in response to the 1990-91 Gulf War.  Beilstein believes the Russian invasion of Ukraine was provoked by the United States and its allies. He believes Russia is committing war crimes there, but opposes sending weapons to Ukraine and supports negotiations to end the conflict.

"I would insist that the United States support negotiations to end the fighting," he said. "This is clearly a proxy war."